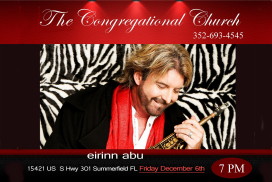 Eirinn Abu will be here with a special Holiday program.  The response to Eirinn’s last visit for a Sunday morning service was overwhelming.  He wanted to return at Christmas time to help us raise money for the Infant & Toddler Pantry children.

When Jerry Doyle was born in 1961, the music from his father’s jazz trumpet was one of the first sounds he heard.
From his childhood home filled with music in Hagerstown, Md., Doyle was to later become known as saxophonist Eirinn Abu.

“My mother was a fan of the legendary sax man Boots Randolph from Nashville,” Abu told The Log. “She surprised me with my first alto saxophone when I was 10 years old.” To the little boy, that gift was a hunk of brass twisted in a different way — a different species of horn with sleek curves. He began his musical studies in the fourth grade, and played in bands throughout middle and high school, eventually being awarded most musical in high school. His interest in biology was pushed aside as Abu went from concert band to marching band to rock improvisations of his garage band, Ecstasy.

Offered a five-year music scholarship to attend Shepherd University in Shepherdstown, West Virginia, Abu later transferred to James Madison University in Harrisonburg, Va., to study jazz. However, in college his love of music was replaced as he began to spend time in the gym and shifted his studies from music theory to medical facts. After graduation, he was hired into the health care world, becoming an executive in sales and marketing where he spent 10 years. But Abu said God intervened and reunited him with his saxophone in a pawnshop in Atlanta, giving him a second chance to make music.

With a mortgage on his home, Abu launched his musical career. On his first independently released CD of smooth jazz, Miami’s top studio players, The Miami Sound Machine, provided accompaniment. Abu decided at that time to become the “saxy voice of 21st century music.” “During my first two CD recording’s I used the artist name ‘Jerry D’,” Abu said. “For me, it was very weird using my real name Jerry Doyle. It didn’t seem artistic enough. The music industry people were always comparing me to Kenny G, which I believe was the reason I could only get so far.” His agent at that time represented artists like Yanni and John Tesh and suggested an artist name change to get away from the Kenny G comparison. “During my travels I met a true Irishman named Tom Clancy at an Irish pub,” Abu said. “No, not the writer but another older man in his 80s. We discussed my dilemma and I explained how I wanted to portray my Irish heritage and my agent’s desire for me to sound more like a world artist. Tom Clancy himself recommended the name ‘Eirinn Abu’ meaning ‘Irish Forever.’” With his agent’s approval, Eirinn Abu was born. “Since that suggestion by Mr. Clancy, my career has continued to advance at a very rapid rate.” But there have been stumbling blocks along the way.

As Jerry Doyle, Abu was charged with bigamy and turned himself in to the Southern Pines Police in 2010, according to The Pilot newspaper in Southern Pines, N.C. Abu told The Log that he has never had a chance to tell his side of the story and that he believed a divorce had been granted. He said he took a plea deal to avoid a trial that would have cost “many thousands.” His attorneys now tell him he may ultimately be pardoned by the North Carolina governor, but in the meanwhile, the event recreated his musical career and ministry. “It was a complete oversight with something that had not been taken care of 10 years ago,” Abu said. “As we understand, many things can get twisted in the media. I’ve learned that God can allow circumstances to happen in our lives, which we feel are bad, but will later be used for good.”

His new focus began with the CD, “A New Creation,” which was recorded with such songs as “Amazing Grace,” “How Great Thou Art,” and a moving rendition of “Hallelujah.” It was a very difficult time, but God brought me through this storm as a much better person and artist,” Abu said. “Our ministry is compassionate and full of love. God has given me a testimony from my own trials and life’s experiences to help others going through their own storm.” “God gave me this beautiful talent to be used for HIS glory.”

Originally a smooth jazz recording artist when he lived in Atlanta in the mid-1990s, Abu hired his first music producer in Miami to release his debut CD, “Do You Want It,” in 2000. “During the year of 1996, I was saved at a church in Port St. Lucie, Fla.,” Abu said. “I started volunteering in church praise bands for years after being saved.” Abu’s CD “Forever in Love” features songs like “You Are So Beautiful” and “I Will Always Love You” with special guest Dolly Parton, and his latest release, “A Saxy Christmas,” contains songs that are some of Abu’s old-time favorites, including “O Holy Night,” “White Christmas,” and “Little Drummer Boy.”

Abu is a person who wants to make a difference in people’s lives through his music. At the Destin concert, he said he would perform songs from “A Saxy Christmas,” and possibly even “Hallelujah.” “I want our music to help people feel peace and love in their hearts,” he said. “To give them a desire to express love with each other when listening to it.”

The tickets will be available after services in the narthex, from the church office and online.