Posted by Congregationalchurch301 on Sunday, November 3, 2019

From the earliest times, the offering of Christ’s "Last Supper" has been known as the Eucharist.  The Greek word Eucharist is best translated: Thanksgiving.  The reason for this term being used is that communion is the most central act in the Christian faith.  The Lord’s Supper and Holy Communion are later titles given to this sacred act or sacrament.   The word Eucharist is returning to common usage even in protestant groups. It will be truly significant when the Eucharist (thanksgiving) returns to Christians as a way of life.

This sermon is not part of a series. It is a single sermon. 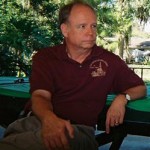 Jim Keough is the Founding Pastor at The Congregational Church of The Villages. Pastor Keough graduated from Ashland Theological Seminary, in Ashland, Ohio with a Doctor of Ministry degree in 1980. He comes to central Florida after pastoring First Congregational Church in Pontiac, Michigan for nearly 20 years.
For An Upcoming Service:
10am Sunday Worship
held at:
15421 S US Hwy 301
in Summerfield
(Directly across from Padua Farms)
for more information:
Phone: (352) 250-6160
Directions